The Promotion of Smoking in the 1950’s - Times Have Changed 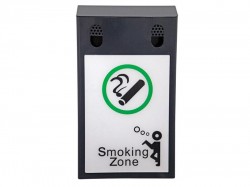 Back in the 1950’s, smoking and cigarettes were actually promoted as being good for you and, to a certain extent, healthy – by doctors!

Many posters back in this decade show advertisements for cigarette brands such as L & M, Pall Mall, Camel, Chesterfield, Viceroys and Lucky Strike with a positive message, with references to certain brands being ‘just what the doctor ordered’ and how ‘more doctors smoke camels than any other cigarette!’ Following on from this, more adverts discussed that there was even scientific evidence to suggest certain brands are good for you, as well as how smoking would keep you slim. 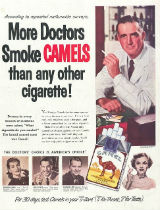 Thankfully, times have now changed dramatically and back when you wouldn’t have thought twice about lighting up in a room full of people in your office, you would be hung out to dry if you did so today.

To add, the adverts we now see regarding smoking include graphic images of how the habit can affect your lungs, brain and heart, along with passive smoking affecting your children. Furthermore, any adverts we may see on posters or packaging in this day and age are extremely harrowing and include words such as ‘smoking kills’ and ‘smoking seriously damages your health’.

In reference to this, the statistics on smoking have also changed since the more recent regulations including the ban of smoking indoors. Consequently, the number of smokers has decreased, which was inevitably contributed to by this new law, with people being put off by having to step outside in the potential rain and cold if they want a cigarette.

Although today there are about 10 million adults who smoke cigarettes in the UK and this is approximately a sixth of the country’s population, according to Cancer Research UK, the number of smokers has decreased drastically by around 60% since 1948, when 8 out of 10 men smoked. In addition, the average number of cigarettes smoked per day has decreased between 1974 and 2012, from 18 to 12 in males and 13 to 11 in females.

This being said however, there will always be some people who seek solace in a cigarette and as a result, you as a business may need to cater for them!