Traffic Cones and Statues: A Tale of Unrequited Love 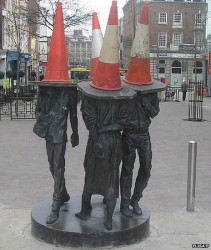 Browsing through the news today, we came across an article written by the BBC titled “Why do people put traffic cones on statues?” Well, firstly it is a valid question. What is the fascination with defacing statues with cones? Providing the addition of a traffic cone accessory to any statues in city centres or towns has become quite commonplace. It is normally the act of drunken pranksters, on the way home after a night on the tiles who fancy a laugh and a joke at the expense of these historic figures. A combination of party-culture and the abundance of road works in a number of towns and cities up and down the country is what makes putting a traffic cone on a statue appear easy and fun to do.

It has been said that this phenomenon is actually a part of tradition and history. For years people have felt the need to vandalise statues of leaders and those with power as an anarchic revolt against authority. The concept of defacing statues has become very regular and has played such a big part in historical events, according to experts. It has been argued that a diadem, which was placed on a statue of Julius Caesar was the catalyst that led to his murder. So many other pieces of “modern history” have resulted from statues being altered in this way. 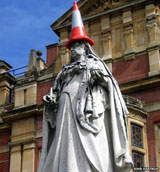 Statues and monuments are established on pedestals all over the world. Their purpose is to commemorate and remember the people or the cause that they are depicting. But with actions like this going on so regularly, are these figures really being remembered? Their position and stance is certainly being acknowledged, but it seems as though the cause and memory behind the immortalised figure has not lived on.

Despite the harm to the statue, and the person it is depicting’s reputation, I think everyone can admit that a statue of Queen Victoria with a cone of her head looks pretty amusing. Here are some examples of how people have made use of traffic cones when it comes to statues.

The most common and probably easiest to achieve is the “traffic cone on head” statue prank. As mentioned, there are so many sites of road works and road closures in city centres; it’s harder to walk through town without stumbling across a traffic cone than it is otherwise. Any size, shape or colour road cone has been used. Each different size adds a different look to the figure it is put on. Also, a cone can, and has been, placed on the head of any statue there is. The higher status the person in the statue the sillier the prank looks.

That was the most obvious example. The next idea is inspired. If the monument not only features a person, but they are on horseback then there are some examples of people placing cones onto the horses head to make it appear like they have a horn. Yes, they turn it into a unicorn. Can’t you just imagine the Duke of Wellington riding a unicorn?

These devilish pranks played upon statues do not always involve traffic cones. In 2000 the statue of former Prime Minister, Winston Churchill that stands in Parliament Square, was sprayed with graffiti as part of protests. It was a strip of turf this time that was placed upon the wartime leader’s head, which gave the impression of a punk-style Mohican.

More recently in the news, the statue of Dickie Bird, the cricket umpire, had fallen victim to a number of tricks. The statue has one finger raised, in the style of the umpire during a cricket match but it was too tempting for passers-by who couldn’t help themselves but hang things from his outstretched finger.

It is a fact that there is some sort of uncontrollable draw between someone who has had a few too many pints and the helpless, stony statue, which almost certainly leads to something downright silly must be done to it.

To see our range of traffic cones, click here.