How to Defend or Save Yourself Against Sharks Using Workplace Products 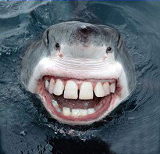 When reading the news online, I saw three different stories that involved the predatory animal of the sevens seas – sharks! Between 1580 and 2012 there have been 2,569 unprovoked shark attacks, 484 of which have be fatal. (Last updated February 2013).

After discussing with the team (and getting some funny looks) here are some products that you may need to defend yourself if you happen to be swimming in shark infested waters.

PLEASE NOTE: We only want you to defend yourself against the great white sharks as these are the main attackers on humans (as most sharks are actually harmless).

First of all, it would be quite silly of the lifeguards or authorities not to display 'No entry' signs. Before the public go for a paddle in what they think is safe waters, they should be warned of the dangers that the area is in fact a home for sharks.

But if you have ignored the signs and gone swimming the giant fishes, the smallest weapon that we could find was an emergency hammer. If you don't know what one is, basically it is traditionally used to break glass doors/windows in an emergency, but we guessed that it could be used in a shark attack emergency. Just simply bob the shark on the head to stun it for a moment and then swim away.

If this method is unsuccessful you could always try a pallet turntable. A pallet turntable is a free rotating disc that can carry loads up to 2000kg. You can use this against the shark to spin it around (whilst humming the song Spinning Around by Kylie Minogue) to make it dizzy enough to be able to get out it's away alive.

Another idea that we had was to use our barrier rope and attach this to a security spike. You then swing this around and bash the beastie over the head to knock it out (for a while). Of course this may cause some brutal damage, so we do not recommend this method as much as others.

Apparently what attracts sharks to us humans is shiny, reflective items, but what about using a large shop mirror to shock the shark into thinking that you are in fact another shark! Brilliant we know – but this idea could go two ways – one way could be that it would be a successful trick and the shark would simply swim away. The other way could

be that it didn't like this other 'shark' and tried to attack the mirror and yourself, either way give it ago.

If you don't think a mirror would work, what about strapping a traffic cone to your back and pretending to be a shark. You could incorporate the 'Jaws' theme song into your act as well as a toy seal in your mouth. Again this could either work or not work – it all depends on the shark and how good your impression is.

Another workplace product you could use is a safety step. Attach this to a raft or boat, climb up the steps and wait for the shark to surface. When you see it's grey fin above water, elbow drop onto the shark like The Rock a.k.a Dwayne Johnson used to. Your probably thinking if I have a boat or raft, why would I ever think about entering the water to face a shark? Well, sharks can easily rip your boat apart and then rip you apart in the process if you don't use this move.

If your a bit of a wimp and don't fancy battling a shark with an emergency hammer, then use these simple and easy tips and tricks to save yourself whilst waiting for help.

Just save yourself tip numero one: bubble wrap is an effective way of protecting an object from damaging or being damaged. This could work the same when you want to protect yourself from a shark. You will need around 75 meters of small bubble wrap and just roll and wrap it around you. This will definitely confuse the shark whilst thinking 'what is my dinner doing?'.

Tip or trick number two: a metal drum. We are not talking about playing a little tune to entertain the shark. Our metal drums are big enough for you to squeeze yourself into – especially if your party trick is to fit yourself into a household washing machine. The drum will take some bashing and biting to get into so for around half and hour maybe less, your safe.

And trick number three: a metal cage. The Workplace Depot sell a whole range of different size metal mesh cages. We have all seen the amazing videos of divers hiding behind a metal cage whilst 'swimming' with the sharks, these cages will do the same thing. Plus, when your rescuer finally comes, then can hook the cage and hoist you up.

If none of these ideas work, shove a clock into its cake hole and unleash your fire extinguisher to blast you far away across the sea and be swimming away from it forever.

***No sharks were harmed in the process of this article. This article is purely for entertainment reasons and we do not recommend you actually using these items to defend yourself against a shark***