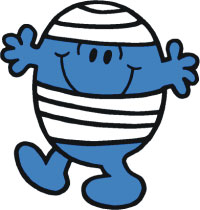 We know the word bumper means something big, enormous, or extraordinarily large. Things are often sold in bumper packs, meaning you get more for your money. What about a bump on the head? Where does that come from? Where did the very clumsy Mr Bump get his name? In a very “countdown” style, here is an origins of words blog, looking at the fun and squidgy term: Bumper.

The first use of the word bumper was in the mid seventeenth century as a description of a full glass. In approximately 1670, the term bumper was an adjective for a glass or goblet filled with wine or beer. If you had a full glass of wine or beer, you were likely to be wealthy and living comfortably at this time, possibly giving us the link to something bumper being excessive as we use it today. The use of bumper to denote a glass of beer or wine that was full to the brim is said to have developed into meaning a swelling of some sort in general.

The commonly used phrase "bumper crop" is believed to originate from the image of a full glass of beer or wine. We use the term bumper crop to describe something large, but the origin of this phrase was actually of a harvested crop. When the harvest was full to the brim and the bag used to transport the goods to market was swelling, much like the glass was with wine or beer, it was known as a bumper crop. This has then evolved through time to what we know and use today.

The notion of wine filling a glass and literally bumping against its brim emphasises the belief that the word bumper derives from the verb "to bump" something. The verb "bump" was used as early on as the 1560s, meaning to bulge out of something or somewhere. It was later, in the early 1600s, that brought about the use of bump to mean striking something firmly or heavily. It is believed to be a term that is Scandinavian in origin.

After this time, in around 1750, the term bumper became a slang term meaning something large. It was used to describe large sums of money, high scores in a game or a full flowing river or stream. Coming from the verb "to bump", it is thought that people associated something large with making a big indent and impact when it connected with

the ground, making a bump, and therefore the large item would be known as a "bumper".

There are a couple of interesting phrases which use the word bump. One example is the term “goose bumps”. This phrase came from the similarity the condition held to a goose’s skin after it had been plucked. Where the feathers used to be there are small protrusions, resembling the skin on a human when they are cold.

A second phrase is “things that go bump in the night”. The earliest recorded use of this phrase is in 1918. There is another written example of the phrase used in a prayer in 1926:

From goulies and ghosties and long-leggedy beasties,
And things that go bump in the night,
Good Lord, deliver us!

Although this prayer was first recorded in 1926, it is likely that it was used much earlier.

A bumper these days is sometimes associated with bumper cars at the fair, where small cars crash into each other and the rubber bumper stops the damage to the passenger and vehicle. It is also the name for the piece at the front and rear of a vehicle in place to lessen the impact of a crash on the safety systems if the vehicle "bumps" into something.

Rubber bumpers for loading bays and parking spaces that house large vehicles such as trucks and lorries are indispensable for any industry that receive or dispatch deliveries. By attaching one of these to the wall or structure around the loading bay, a rubber docking bumper prevents the lorry from hitting the surrounding wall as it pulls into the designated docking space to take or deliver orders. It is a way to keep the vehicles and the driver safe from accidents and to protect the building structure too. They come in a variety of shapes and sizes to suit different needs. One sort is known as a D-Section docking bumper due to its D shape, offering a long and thin bumper pad to protect vehicles and buildings.