Most of the baffling myths have one thing in common – they are not required by health and safety law. As part of HSE's Myth Busters Challenge Panel, they have published its top ten worst myths.

1. Children being banned from playing conkers unless they are wearing goggles

Brought up in September 2007, this old chestnut is a classic myth. A headteacher decided that the children of the school should wear safety goggles to play conkers. So then a trend started and some schools banned conkers or made children wear goggles and padded gloves, on 'health and safety' grounds.

In reality, the risk of injury from playing conkers is very low and just not worth the hassle. If children are deliberately hit each other with conkers, it becomes a discipline issue not a health and safety.

2. Employees are banned from putting up Christmas decorations in the workplace

Every time the Christmas season comes around, companies are banning their employees from decking the halls and putting up trees in the workplace, again for 'health and safety' reasons or the decorating needs to be done by a 'qualified' person.

Realistically, employees just have to be safe, sensible and be provide with suitable step ladders. Most companies such as the HSE and local

councils manage to put up the decorations with no fuss.

3. Every trapeze artist is required to wear a hard hat

There have never been any regulations for this. It was widely reported at the time and regularly repeated since, it is all a big myth.

Although they are great for protecting builders from falling debris, hard hats have no place in the trapeze artist industry.

4. Pin the tail on the donkey is deemed a health and safety risk

The traditional game of 'Pin the tail on the donkey' has been under threat because parents consider it a health and safety risk.

HSE said “Not trusting children with drawing pins seems a little overprotective to us”.

Millions of children have played this game, passed and present and there haven't been any problems.

5. Candy floss on sticks are banned due to people worrying if someone trips and injures themselves

Nothing beats a bit of candy floss on a stick. However, according to media headlines back in 2010, a candy floss stick can beat the consumer up.

It put many people in a sticky situation as they didn't know what to believe. The truth is that there is no health and safety regulations against candy floss on a stick.

In 2004, a town briefly took down its hanging baskets after they feared that the old lamp posts would collapse. Very cautious of them for something that was unlikely to happen.

However, after a thorough check, the hanging baskets were replaced and have been hanging on the lamp posts since.

There was also a worry that hanging baskets would fall onto peoples heads. 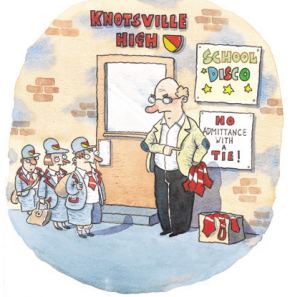 Children over the years have been wearing traditional ties as part of their school uniform. But in 2010 parents started worrying about their child’s safety and requested that the ties should be clip-ons. So schools across the country have invested in some clip-on ties.

We all know that most schools have simple precautions such as removing the tie whilst working with machinery or in a science lab. But the concern is that children playing can turn into a serious injury because the ties could potentially strangle the 'victim'.

Grim I know but this is a true story, but the HSE did not impose this rule – it is totally up to the schools.

8. Park benches are 3 inches too low – let's replace them all!

Apparently this story took the HSE by surprise. They said “How could there be a health and safety law on this? The simple answer is, there isn't”.

The myth originated from a facility manager's decision. There are no bench height requirements and the HSE will not be sending inspectors out to measure the height of benches.         Britain's park benches are saved!

9. Flip-flops are banned in the workplace

In the summer months, we want to be as cool as possible and at work, this can be a difficult task. Flip-flops and sandals are supposedly banned from the workplace according to reports. But again, the HSE doesn't ban them from the workplace (unless advised in industrial locations).

Slips, trips and falls do account for around 30% off all workplace accidents. What you wear on your feet will make a difference, so if the environment you work can't be kept clean and dry all the time, then wearing suitable, fitting shoes that have a good grip.

10. Graduates are banned from throwing of their mortar boards

Apparently the health and safety law has banned graduates from celebrating their graduation success in the time-honoured fashion – this is completely wrong.

The chance of anyone being injured by a flying mortar board is very slim but when the concern is actually the hats not being returned in a good condition, the HSE should not be blamed.

Posted in News, Health and Safety