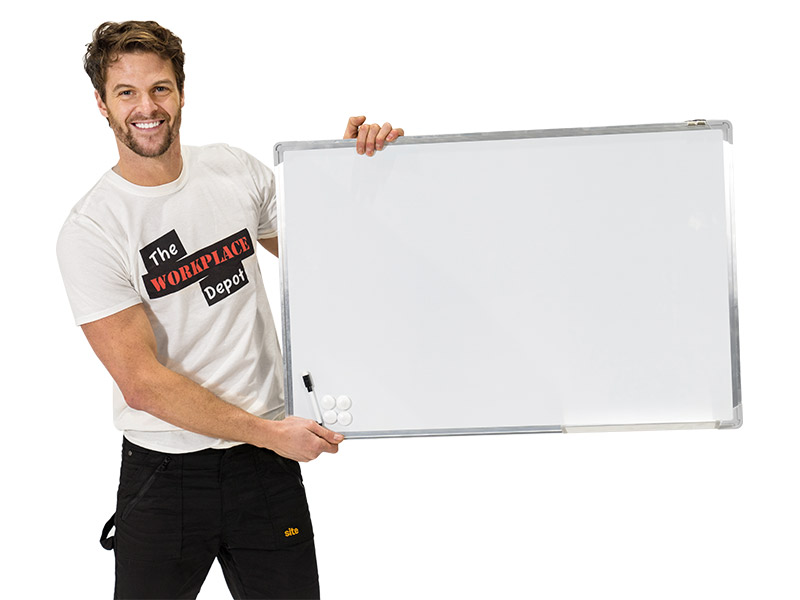 We won’t hide our love for the good old blackboard—that sweet smell of chalk, that hissing sound as you write on the board... You could write in bold by applying pressure and shade different areas of a diagram by flipping the chalk sideways and wiping it across the blackboard surface. There used to be "chalk-fights” between groups of students and I remember more than one of our teachers target-practicing on my rowdy peers with pieces of chalk; but thanks to whiteboards, we don’t see any blackboards around anymore.

Invention and History of Whiteboards

Why did the whiteboard become such a huge success when we already had blackboards? The answer is "convenience". Blackboards were hard to wipe clean and turned whitish after a little use. You had to wet-clean them frequently to keep the writing clear. In fact, the earlier versions of whiteboards also needed to be wiped with a wet cloth. It was for this reason that despite being invented as far back as the late 1950s, whiteboards did not become very popular until after the invention of dry erasable marker, aka whiteboard marker, in 1975.

So, who invented this cannibalistic contraption that has wiped out its predecessor without a trace? There are two people who are credited with inventing whiteboard. According to the first version, a photographer called Martin Heit is said to have stumbled upon what later developed into the whiteboard. It was 50 years before the age of digital photography, and Mr Heit had thousands of negative film stored with him. When talking to clients on the telephone, which was also a new invention in those times, he used to note down details and instructions on the negatives using a marker pen. The writing could be easily wiped clean with a damp tissue.

Mr Heit initially developed the idea in the late 1950s as a small scribbling board next to a wall-phone. He planned to unveil his invention at the Chicago Merchandise Mart, but the showcase where his boards were displayed burned down the night before the launch. Discouraged, he sold the patent for the whiteboard to an obscure company that would eventually become Dri-Mark, the company that introduced the whiteboard to the education world.

The second account claims the whiteboard was invented by Albert Stallion in the early 1960, when he was working in an American steel production company. One of the company's products was enameled steel, which was primarily used for architectural cladding. At one of the meetings, Mr Stallion suggested that enameled steel sheets could prove to be a very good addition to the writing board market, and could replace chalkboards. With the company being a steel manufacturer, none of Mr Stallion's associates paid much attention to his idea, however he believed in his vision and parted ways with the company to launch his own whiteboard business by the name of MagiBoards.

Although whiteboards became available in the market in the early 1960s, their widespread acceptance was going to take another 30 years or so. The earlier versions had to be wiped clean using a damp piece of cloth or tissue. That problem was solved after another inventor, Jerry Woolf, patented the first whiteboard pen in 1975. It contained a new type of non-toxic, erasable ink that adhered to glossy surfaces without being absorbed by them. The powdery ink can be easily cleaned using a dry wipe, leaving the surface spotless. Whiteboards still continued to grow slowly until the mid-90s when they were widely adopted by the education market, because the social trends were shifting towards healthy living and the chalk-dust from the blackboards was believed to cause allergies.

Which Whiteboard Should I Buy?

Today, the wall mounted whiteboard has completely replaced blackboards at educational institutions, offices, hospitals, factory floors and homes, with no real alternative in sight. Whiteboards are simple and ingenious. They are super-convenient to use and last for years and years. They are an inexpensive and flexible medium for communication, instruction and planning.

Unlike their expensive enameled- steel-built ancestors, contemporary whiteboards come in cheaper materials such as laminated chipboard or melamine. However, high-end whiteboards made from PET or porcelain-coated steel are available for more upscale or rigorous applications. When buying a whiteboard, you should select a material that suits your purpose and the intensity of use.

Laminated Chipboard: These are cheap whiteboards with a short life, but can still last you many years. The laminated surface may become stained after repeated use, making these boards unsuitable for instructional purposes.

Melamine Whiteboards: These are made of light-weight fiberboard coated with melamine; a resin infused paper. The quality of these boards depends upon the thickness of the coating. There are many different qualities available and you should be careful if you are buying these whiteboards for long-term use.

Painted Aluminum and Steel Whiteboards: These high-quality whiteboards are generally manufactured for custom applications, such as record tracking, patient information, or tournament boards. Steel whiteboards are long-lasting and allow the use of a magnet. Aluminum whiteboards are rarely used, although they are light-weight and corrosion resistant.

Porcelain Steel Whiteboards: Some of these boards come with a lifetime warranty. The ceramic hard-coating is so non-porous that not even the slightest amount of ink penetrates the board's surface, keeping it free of staining and ghosting, practically forever. Their extra-long life and excellent cleaning properties makes these boards best-suited for educational applications.