Inside the Workplace Of... Part Two

Inside the workplace of... Part Two

Ping-pong, ping-pong, is not a sound you would normally hear in a meeting room. But in the Red Bull headquarters in London, table tennis is part of the furniture, quite literally.

Jump Studios have designed a dynamic, interactive and adrenaline filled, 3 floor building for the employees of Red Bull. Each floor is filled with activities and features for all the employees to use and experience.

Red Bull as a brand pride themselves on being actively involved in adrenaline sports, and this is where the design had evolved from – the idea to create an environment to stimulate the minds and bodies of employees and visitors.

Jump Studios said that the idea of the design was to try to “Encourage interaction between employees while communicating the company's brand values and identity were the dual aims of the design of Red Bull's new 1,860 sq meter headquarters.”

The 1.2 million design amalgamated two separate offices into one central location. The main reception, bar, café, formal and informal meeting areas plus a main boardroom are located on the top floor, acting as a social hub for employees. Even when relaxing, there will be some communication and interaction between employees.

erior and features are 'stitched' together by a seamless carbon-fibre element that runs from the exterior terrace which provides a wing canopy. As it continuously snakes through the building, forming the reception area, and encapsulating the main boardroom.

Some of the fantastic features that Jump Studios have included are a floating staircase, a sleek, steel slide and table tennis styled meeting room.

“The moment you enter through the doors at Pixar, you are instantly struck by the immensity of the building and the beauty of it's design” said David Michael “Mike” Bastoli, Blogger-In-Chief of Big Screen Animation.

You could image how amazing the Pixar headquarters, in Emeryville, California, would be. Even before you enter the building, Luxo Jnr. and his iconic ball are guarding the main entrance to the building. Behind Luxo Jnr. there are the gardens and a range of outdoor activities including, a swimming pool and a beach volleyball court.

The main atrium is the meeting point of the campus. The area was designed for each of the company's departments could interact with each other. Within this area there is Café Luxo filled with a range of delicious hot and cold meals for the employees to tuck into. Many people have said that this room is the best of all – the cereal room! It features a whole variety of cereals that are completely free!

After a long session of creativeness, Pixar employees will want somewhere to relax. The games room has a pool table, table tennis, Foosball, air

hockey and a stack of video games, (mostly Pixar games of course). There is also a state of the art screening room( a.k.a a cinema) for all employees to gather some 'inspiration' from watching some classic Pixar films. 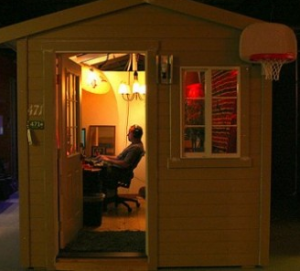 When you look at the photos taken of the interior of the building, you can see why everyone working there is inspired. There are many pieces of concept art across the walls alongside models of the some of the characters. The banner artwork in the atrium changes every time a new Pixar film is released in the cinemas.

Within the animation department, the office layout is incredibly different. Instead of the boring studio, one guy is working in a garden shed (where the best creations are made).

Roald Dahl's Writing Hut is where the magic happened and is where all his magnificent stories came to life.

The Writing Hut is a small brick outhouse. The old armchair where he used to sit has a hole cut in the back and a writing board laid across the arms. On the nicotine-stained polystyrene tiled walls, there are photos of the old schooldays alongside a small cerebral valve. This is not the

only body part lying abut, there is a hipbone on the desk and an artificial hip as a handle for a drawer.

On the table to the right of the armchair, his last Marlboro sits in the ashtray and the waste paper bin has been emptied, although he died 23 years ago.

There were many debates on whether to open the door of the outhouse to the public, for them to experience his past. It has now been moved piece by piece, to a Roald Dahl Museum and Story Centre in Buckinghamshire.