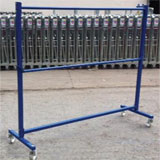 London has been ranked among the top 5 fashion capitals in the Global Language Monitor rankings for many consecutive years, and rose to the top spot in 2012 and 2011. London and other leading cities such as New York, Paris and Milan are termed fashion capitals of the world because the trends that originate in these cities are followed by the whole world.

The Fashion Scene in London

More than half of the United Kingdom's fashion jobs are concentrated in or around London, where the fashion industry employed more than 46,000 people in 2010. Most of the fashion outlets and designers are located in the Knightsbridge district, but many of them can also be found in South Kensington and Chelsea areas. The City hosts many fashion events, with the London Fashion Week being the most notable among them.

Organised by the British Fashion Council and sponsored by Vodafone, (among others), the London Fashion Week attracts more than £100 million worth of orders each season, over half of them coming from the international guests. Over 5,000 visitors including buyers and media crews attend the event, and its coverage exceeds that of major sporting events and news. More than 120 accessory and ready-to-wear designers showcase their products through some 60 catwalk shows and around 75 off- and on-schedule presentations and salon shows. Designers around the world find inspiration from this fashion mega-event, following the prints, cuts, and fabrics that the top models flaunt on the glamorous catwalks.

London is home to many world class designers including Vivienne Westwood, Stella McCartney, Jimmy Choo, and Manolo Blahnik. Vivienne Westwood started her fashion career in early 1970s, eventually becoming famous for her bondage and punk style clothing. She now owns three shops in London and several others around the globe. Stella McCartney is acclaimed for her sharp tailoring that blends femininity with boldness and confidence. She has won multiple British and international awards for her innovative work. Jimmy Choo, the Malaysian born fashion designer rose to success because of his handmade women's shoes, and now owns a multi-million pound fashion empire. And Manolo Blahnik is another fashion tycoon best known for his self-named women's shoe brand.

How Fashion Fuels the Economy

Apart from the designers and fashion companies, many other businesses and individuals benefit directly or indirectly from the high profile London fashion scene. Newspapers and TV channels find highly watched content and highly paying advertisements. Thousands of people find jobs as tailors, models, salespersons, stage and camera crews, makeup artists, hairstylists, choreographers, and fashion journalists. The LFW and other fashion events cause thousands of people to travel, from in-country and abroad, to the venue of the shows, stimulating the airline, hotel and transport businesses.

Further down the line, there are countless other trades and professions that gain from the booming fashion industry. Consider, for instance, the thread or buttons or textile industry, all of which are stimulated by fashion. Fashion outlet design and window dressing has become an industry in itself. There are factories spewing out garment rails by the hundreds for designers and companies to exhibit their latest designs. With almost all sectors reaping the rewards of the bustling London fashion scenario, it shouldn’t come as surprise when the BFC claims that the fashion industry contributes a mind-blowing £37.2 billion per annum to the national GVA. This includes £98 million spent in the tourism sector.

Fashion is about showing off, and you can't possibly hope to sell something that you haven’t displayed in your shop or window. That's why garment racks, dummies, and other display equipment become essential for fashion outlets. Visit our website if you need high quality garment racks and retail trolleys for your shop.